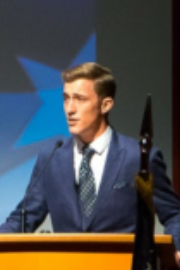 
John Alexander is a fourth-generation Texan, Naval Veteran, and a University of Texas graduate.

While in the Navy, John enlisted as an Operation Specialist onboard USS Kearsarge. After his honorable discharge from the United States Navy, he went on to fulfill his late grandfather's dreams of graduating from the University of Texas. While pursuing education John found his passion in serving Texans and joined Senator John Cornyns team as an intern. He has since worked for the Republican Party of Texas, Save Austin Now, and served as a Legislative Director at the capital for State Representative James White.

John was encouraged by his family and friends to advance conservative leadership in Texas. With swift action, he intends on carrying out these wishes by acting as a shield for those who feel they no longer have a voice. In his free time, John enjoys reading alongside the river, fishing with his friends, and exploring new areas.