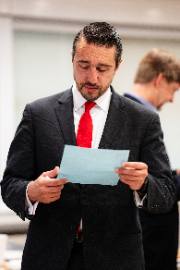 
Chris is the Trainings Coordinator within the Career Services training program.  He brings over ten years of private sector experience in several industries, geographies, and countries.  He has been in leadership roles in software companies, healthcare companies, and also the restaurant industry in his younger years.  Within the conservative movement Chris is devoted to restoring the liberalism of the American founding, rooting out runaway Progressive politics, and crafting sensible foreign policy that will enable American security, prosperity, and liberty.

Chris joins The Leadership Institute shortly after completing a Master's Program in Foreign Policy with China at the Fletcher School of Law and Diplomacy, which is a hybrid education between Tufts and Harvard Universities.  He followed this with nine months of research at the Heritage Foundation's Simon Center of American Studies before joining the LI team.  Prior to his pivot to the policy world, Chris spent five years in management consulting with Unitedhealth Group's Optum Consulting.  This role took him around the country and exposed him to a wealth of business operations.  His earlier work experiences ranged from finance, to construction, to managing a small restaurant.

Chris has lived in six US states as well as Beijing, China and Geneva, Switzerland; he speask french and is developing his Mandarin.  He has taught classes in both Chinse History as well as Project Management.  If you're ever interested, he'll be happy to chat with you about the NBA or play a quick game of chess.