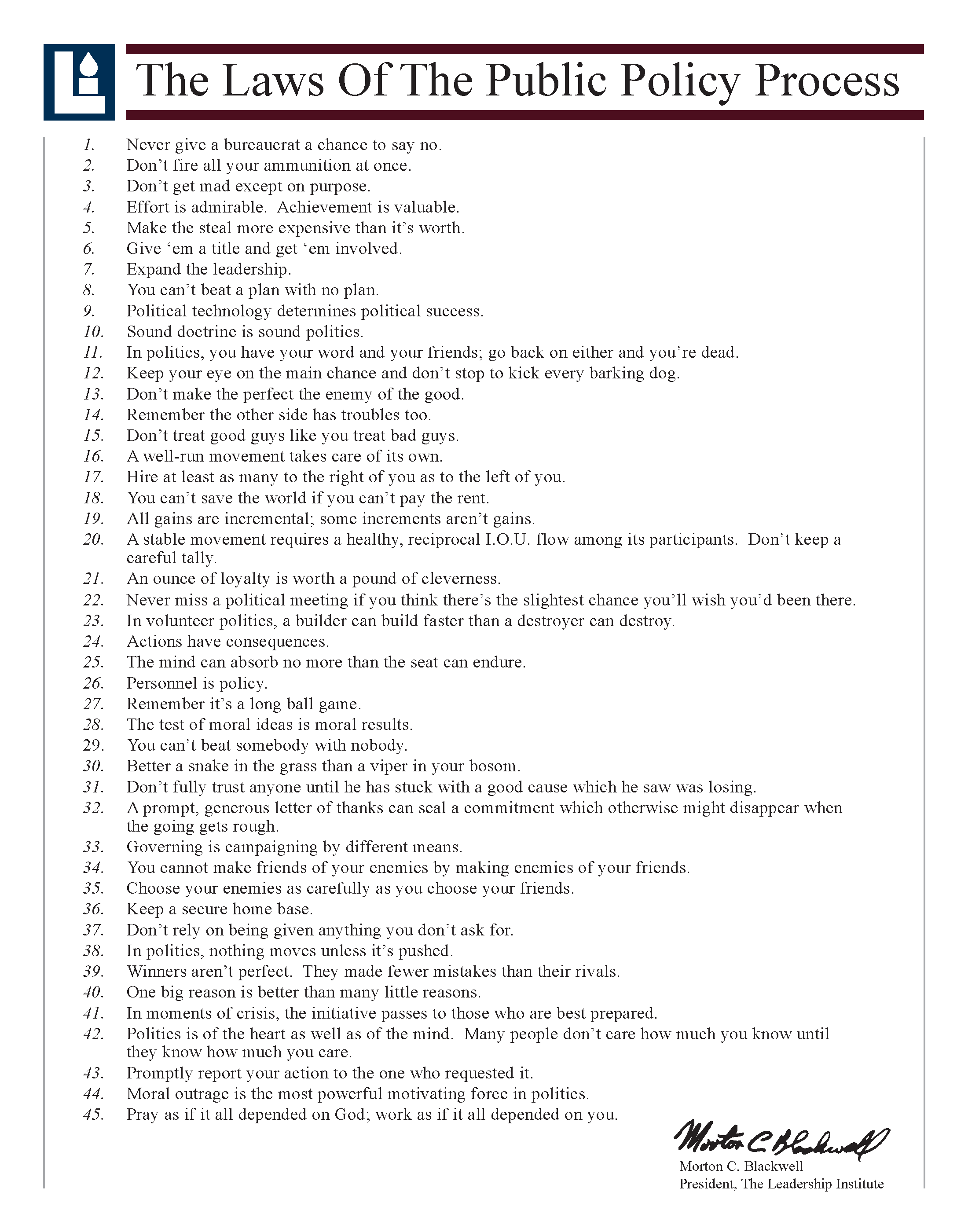 Available in other languages here.

1. Never give a bureaucrat a chance to say no.

2. Don't fire all your ammunition at once.

3. Don't get mad except on purpose.

4. Effort is admirable. Achievement is valuable.

5. Make the steal more expensive than it's worth.

11. In politics, you have your word and your friends; go back on either and you're dead.

12. Keep your eye on the main chance, and don't stop to kick every barking dog.

13. Don't make the perfect the enemy of the good.

14. Remember the other side has troubles too.

16. A well-run movement takes care of its own.

17. Hire at least as many to the right of you as to the left of you.

19. All gains are incremental; some increments aren't gains.

21. An ounce of loyalty is worth a pound of cleverness.

22. Never miss a political meeting if you think there's the slightest chance you'll wish you'd been there.

23. In volunteer politics, a builder can build faster than a destroyer can destroy.

25. The mind can absorb no more than the seat can endure.

28. The test of moral ideas is moral results.

29. You can't beat somebody with nobody.

30. Better a snake in the grass than a viper in your bosom.

31. Don't fully trust anyone until he has stuck with a good cause which he saw was losing.

32. A prompt, generous letter of thanks can seal a commitment which otherwise might disappear when the going gets rough.

33. Governing is campaigning by different means.

34. You cannot make friends of your enemies by making enemies of your friends.

35. Choose your enemies as carefully as you choose your friends.

37. Don't rely on being given anything you don't ask for.

38. In politics, nothing moves unless pushed.

39. Winners aren't perfect. They made fewer mistakes than their rivals.

40. One big reason is better than many little reasons.

41. In moments of crisis, the initiative passes to those who are best prepared.

42. Politics is of the heart as well as of the mind. Many people don't care how much you know until they know how much you care.

43. Promptly report your action to the one who requested it.

44. Moral outrage is the most powerful motivating force in politics.