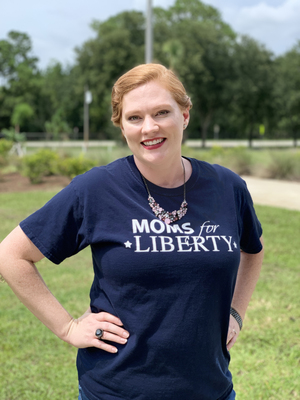 "This story is being replicated in counties across the nation. Moms and dads are awake. They do not want to co-parent with the government, and they will not allow classroom doors to slam closed on their parental rights – and God bless them for it.” – Marie Rogerson

Meet Marie Rogerson, a Leadership Institute graduate, Campaign Management Consultant, and the Director of Development at Moms for Liberty.

During my interview with Marie, we discussed her past involvement in non-profit organizations, her views on parental influence on local government, and experiences from her current role in Moms for Liberty.

I’m a military brat. I’ve moved more than 30 times in my life.

My father’s military experience taught him to remain vigilant, and that extended into the arena of local politics. There were 6 of us kids, 4 boys, and 2 girls. My father paid extra attention to the goings-on at our school board. Even back in the mid-nineties, he realized education in America was going in the wrong direction and couldn’t stand by without taking action.

When I was about 13, he ran for school board.

Mind you, we lived in basically the only blue county in the state of Kansas and my father was as conservative as they come. He knew he stood little chance, but he also understood that he could bring attention to key issues while exemplifying the importance of standing up for what you believe in.

He didn’t win, but I consider his run my first foray into politics.

When I was 21, I served for 18 months as a missionary for the Church of Jesus Christ of Latter-Day Saints, teaching the principles of Christ’s liberty in the Spanish language. Serving in California, most of the individuals I taught were illegal immigrants. They told eye-opening stories about the corruption in their home countries and the lengths they went to cross the border. After my mission, I did a study abroad through Latin America and witnessed firsthand the places many of the people I taught came from.

Both experiences deepened my appreciation for the freedoms we enjoy in America as well as the benefits of our free-market system. They also strengthened my empathy and gave me a human connection to an issue that I had previously only seen on the news as pundits speculated on the state of our border.

Besides a brief stint as a Communications major, I mostly studied Political Science while at university. Unlike many professors today, mine were excellent at encouraging critical thinking rather than indoctrination. We discussed the political history of the world openly, and I walked away from the experience with a deep understanding of how entirely flawed systems like communism and socialism are.

I finished my degree while pregnant with my first daughter.

My husband Aaron and I have now been married for 15 years and have a total of 3 girls. Honestly, I owe most of who I am and what I’ve accomplished to him encouraging me to pursue my passions and continue to learn.

You are the Director of Development at Moms for Liberty; what inspired you to get involved with this organization?

Tina Descovich, one of the Co-Founders of Moms for Liberty is a close friend of mine. I helped manage her first campaign for school board.

After we both lost our elections in 2020, we found ourselves with unexpected time on our hands and started a book club (for lack of a better word) to study the founding documents. We would dissect every word and phrase and discuss how the document applied to current events. It took us nearly six months, meeting twice a month, to read the Declaration of Independence.

During that time Tina launched Moms for Liberty and asked me to help design a program around what we had been doing, which we now call Madison Meetups.

Shortly after Moms for Liberty launched, one of the three founding members had to step back, and I was asked to take her place on the Executive Board. What was pitched to me as a “silent partner” position, has been anything but – which is good considering redheads aren’t known for biting their tongues.

After months of balancing our explosive growth, a demanding but adorable toddler, and my duties as Director of Operations for Foster Florida, I made the decision to resign from my paid job and cast my lot with moms in America, fighting for the survival of all we hold dear.

While I had numerous attachments to the organization, there are two main things that tipped the scales for me in favor of Moms for Liberty.

First, the grassroots focus. This isn’t a national organization promising a magic 12-step program that will fix local schools. They understand that schools can only be fixed, with any lasting effect, by local people with the autonomy to take the fight in the direction they need.

Our chapter leaders aren’t paid activists, they already have skin in the game. The children they drop off at school every morning and pick up each afternoon are their motivation.

Second, it isn’t about merely drawing attention to the issue, it is about plugging parents in and helping them understand the system so they can fix it. There is plenty of conjecture and discussion about these issues; what we need are engagement and action. That is what Moms for Liberty brings to the table.

Do you have any insightful stories about your work at Moms for Liberty?

There is a mom whom I have known for several years. Since 2018, I’ve invited her to get involved in a number of ways without much success. When Moms for Liberty launched, she showed up at a chapter meeting. She then attended the next school board meeting.

The following month, with trembling hands she addressed the school board for the first time.

At each event I watched her come out of her shell as she found her people. She stood shoulder to shoulder with moms who also weren’t exactly “political” people but were willing to learn together to preserve their parental rights. It is amazing to see these women don a navy shirt like armor and stand on the frontlines for their children.

Almost a year later, this mom is boldly petitioning for what is right everywhere I look.

This story is being replicated in counties across the nation. Moms and dads are awake. They do not want to co-parent with the government, and they will not allow classroom doors to slam closed on their parental rights – and God bless them for it.

You are also a Campaign Consultant. How has Leadership Institute helped prepare you to ensure your candidates run successful campaigns?

When the pandemic hit, like many people, my family began doing puzzles. It wasn’t until we dumped out the first box and my daughter began attempting to put together random pieces that I realized no one had ever explained to her that you start with the edges then work your way in. She could have figured the puzzle out eventually, but she would have endured a lot of frustration in the process.

Leadership Institute was like that for me. I had volunteered and worked on campaigns before, but until I sat through four full days of Campaign Management School, I was trying to solve a complicated puzzle by identifying patterns and putting random pieces together.

Now I have the skills to organize effectively, mobilize, and win.

We need more people capable of efficiently matching pieces to reveal beautiful images demonstrating how the principles of liberty can bless their communities.

You were the Director of Operations for a non-profit serving the foster care community. What experience from that position has helped you in your current roles?

My time with Foster Florida taught me about working on a board, the basics of running a non-profit, and most importantly the limit to parental rights. The goal when a child is first removed from their family and placed in care is reunification. That is not always the result, unfortunately. Even fundamental parental rights have limits.

It has been a wonderful perspective enhancer to go from the world of foster care into the battle for parental rights. I have watched the anguish on a good mother’s face as she was denied her parental rights temporarily due to poor choices as well as her joy when they were restored. I see the same anguish and joy on parents’ faces now as the Director of Development for Moms for Liberty.

The difference is that these parents did nothing to warrant the violation of their rights and were afforded much less due process.

America’s leaders and its people may have made tragic mistakes along the way but that does not change the principle.

If you find yourself disillusioned, you have likely lost sight of the mark. Focus less on the mistakes of man, and more on the divine principles enshrined in the Declaration of Independence and the US Constitution.

Spend more time doing things that reinforce those principles and the light of hope will grow in your life. Manage your expectations, people have always been flawed. Find a principle that is not and hang on to it for dear life.

Are you ready to take action and learn how the puzzle fits together, so you can make a difference? Check out the Campaign Management School Marie says gave her “the skills to organize effectively, mobilize, and win.” If you’re looking for training you can take online on demand – including a free one on school boards – you can find a whole list of on-demand training here.