Ann Schockett was elected president of the National Federation of Republican Women (NFRW) at the 40th Biennial Convention in Indianapolis and took office in January 2020. Previously, she served on the NFRW Executive Committee as 4th vice president and as member-at-large, and was the advisor to the NFRW Campaign and Public Relations Committees.

Ann’s 40 years of public service began when she was elected the youngest Republican State Committeeperson in New York State history. She has headed and advised in 43 election campaigns, has overseen NYGOP fundraising efforts, elections and special events and has worked with government and non-profit entities on all levels. Ann is a sought-after speaker and is widely recognized for her activism on local to national issues. She has been awarded in political areas as “Executive GOP Leader of the Year,” “Woman of the Year” and “Republican Woman of the Year.” She leads by example in fostering Republican Party values and is dedicated to empowering women to become more active and fulfill leadership roles. A proud New Yorker, Ann has served as Republican State Committeeperson and a GOP leader, Nassau County FRW President, and NYSFRW Corresponding Secretary and President. She is an NFRW Capitol Regent, member of the NYGOP Empire Club, and founder and host of the “F1rst Tuesday” national call-in series.

Ann is a businesswoman turned consultant and advises in areas such as public relations, campaigns, multi-media, and business performance. She has been honored as “Business Advisor of the Year.” As a former producer, director, and host of corporate and commercial productions, she has received local, national, and international media awards.

Inspired early on by her family who served our great nation in both world wars and who founded the community’s hospital center, local Rotary International, and synagogue, Ann developed a deep commitment to country, community, and faith. She is a founding Board member of Save the Persecuted Christians, serves on the Board of Regents for the Center for Security Policy, and is a delegate to the World Zionist Congress. She was NYS’s first Congressional District Leader for HSUS and is a citizen lobbyist for humane legislation for animals. One of her favorite accomplishments was creating the Community Enrichment Mini-Center in NY dedicated to enhancing the lives and careers of people of all backgrounds, providing for 13 non-profit and start-up organizations and serving as an independent Hurricane Relief Center during Superstorm Sandy. In the synagogue founded by her family in 1922, Ann was involved in service and support.

Ann’s three children and five grandchildren are her utmost joy and achievement, propelling her to devote her time and energies to help secure their rights, safety, and freedoms in the greatest nation in the world. 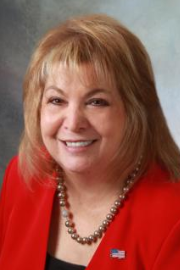