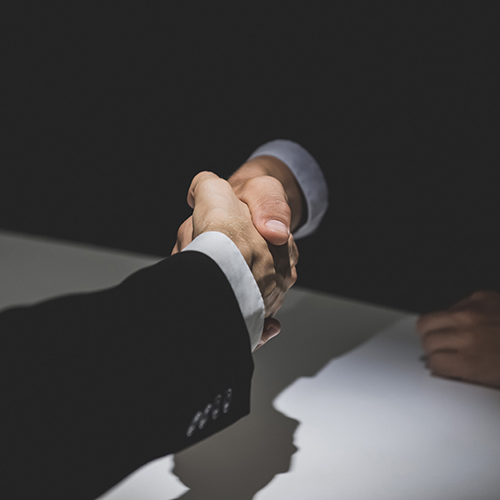 No activist can work in the public policy process for long without running across one or more conspiracy theories.

Since at least 1960, conspiracy theories which relate to politics have circulated widely. Such theories trap many otherwise smart people into years of inactivity, pessimism, and despair. The phenomenon is so common that it should be understood because it affects so many people who have leadership potential.

Common organizational affiliations link different people. Common people link different organizations. The linking lines drawn on a page appear as a sinister and frightening web of organized evil. The late Don Lipsett, secretary of the Philadelphia Society, amassed a collection of such drawings from different sources and called them "termite charts."

In the 1960s, conservatives spent enormous amounts of time documenting the links among different leftists and leftist organizations -- who shared membership in which groups, who signed public statements with whom, who frequently attended the same events.

These studies reached the conclusion that there was out there a vast, super-secret, well-placed, fabulously well-funded, centrally organized, enormously powerful, left-wing conspiracy, with tentacles everywhere, capable of defeating the lowliest conservative who dared run for the school board in Pottawatomie County, Oklahoma.

These presentations usually blamed everything bad in the world, from bad weather to bad breath, on the oh-so-clever, secret manipulations of those who run a described conspiracy.

The conspiracy is commonly presented as so powerful as to be virtually irresistible and to be engaged primarily in a mopping-up operation to eliminate the last vestiges of conservative resistance.

The major variation among the many such conspiracy theories was the identity of the central structure which ran all the left wing organizations. In one theory, the Communist Party of the Soviet Union ran the whole deadly network. In another it was the Council on Foreign Relations. In another it was a group called the Bilderbergers.

Other conspiracy theories, and I'm not kidding, spotlighted as the sinister master of the left-wing conspiracy the Pope, the Jews, the Masonic Order, the Rockefeller family, the AFL-CIO, the Tri-Lateral Commission, the Bavarian Illuminati, or others.

Some of these conspiracy theories were so poorly presented and illiterate as to be obviously ludicrous. Others included staggering amounts of careful documentation of the links among the supposed conspirators.

Thousands of people who were fully committed to solid conservative principles spent much of their time studying, even memorizing, conspiracy theories. Rather than working to win political battles, they devoted themselves to "proving" conspiracy theories.

It's almost impossible to argue successfully with a deep-dyed conspiracy theorist. Those fully convinced of a conspiracy theory take any contradictory information as proof positive of just how clever the masters of the conspiracy are.

Many conservatives became so convinced of the overwhelming power and cleverness of one or more of these conspiracies that they sank into despair and virtually ceased political activity. After all, if one is faced with opposition so powerful and so clever that defeat is inevitable, why bother to do anything about it except to complain?

On the other hand, many other conservatives increased their activism. Starting about 1972, conservative activists dramatically increased their study of how to win. They created a galaxy of new organizations. They also multiplied many times the members, financial resources, and effectiveness of previously existing organizations. The National Right to Work Committee, for example, grew from 25,000 members in 1972 to 1.7 million members in 1979.

As the number and effectiveness of conservative activists grew, it became possible to spin a new sort of conspiracy theory, which is best known today as Hillary Clinton's "vast right-wing conspiracy."

Perhaps the first such manifestation was a story in The Washington Post in 1978, which featured a number of conservative leaders and organizations by then described in the media as the New Right. The Post ran the names and photos of Paul Weyrich, Terry Dolan, Richard Viguerie, Howard Phillips, Morton Blackwell, and others, and devoted much space to all the "links" between prominent conservative activists and their organizations.

In recent decades, a cottage industry has arisen which spins a variety of conspiracy theories about a vast, super-secret, fabulously well-funded, centrally directed, hugely powerful conservative conspiracy, with tentacles everywhere, capable of defeating the lowliest liberal school board candidate in Pottawatomie County, Oklahoma.

A shelf of books has been published about alleged right-wing conspiracies, including massive documentation of all the links, down to details of who has lunch with whom.

Most authors of these studies present their (different) conclusions as to who is really giving the orders to everyone in the right-wing conspiracy. These books are credible only to those completely ignorant about the conservative movement -- for example, a 1980 book, Thunder on the Right, by conservative turncoat Alan Crawford. The best thing that can be said about Crawford's book is that some pages are without factual errors.

Even the most bizarre conspiracy theories convince some people, probably because an organization, where somebody is the boss, is much easier to describe and to understand than is a movement, which includes many independent leaders.

Finally, computer technology has enabled anyone to create a unique conspiracy theory, complete with documented links. Anyone can get on the internet and call up www.namebase.org/nbindex.htmll, click on "Proximity Search," and type in the name of any conservative leader or prominent organization.

This website, based on immense but unreliable documentation of "links" among conservatives, will create a termite chart in color, with any prominent conservative leader or conservative organization at the very center of the page, complete with dozens or hundreds of lines showing published links to other people and organizations and their links to each other. Wow!

Of course, for anyone experienced in or knowledgeable about the modern conservative movement, the idea that a centrally directed, secret conspiracy exists among conservative leaders and organizations is absolutely preposterous.

Most conservative organizations are led by fiercely independent organizational entrepreneurs, the men or women who created these groups or built them into effectiveness.

Reed Larson of the National Right to Work Committee, Paul Weyrich of the Free Congress Foundation, Ed Feulner of Heritage Foundation, Phyllis Schlafly of Eagle Forum and dozens of other prominent and admired conservative leaders would laugh out loud at the suggestion that any of them could give orders to the others. None of them would submit themselves to any political structure which might subject their activities to the direction of any or even all of the others.

In fact, several attempts to put together umbrella groups to control the actions of many conservative groups have failed. And conservatives should be glad those efforts all failed.

If all conservative groups were controlled by some central leader or by votes of some board of directors, conservative principles would be much less effective in the public policy process.

A movement composed of many different leaders and organizations accomplishes more than any leader could if he controlled them all. Competitors working for the same general purposes innovate. Some groups grow faster than others. Some are better at certain things than others. Some can gain support from donors who wouldn't contribute to some others. And some can decline or even collapse without harming others.

Adam Smith's "invisible hand" works as well in the public policy process as it does in a commercial market system.

Hillary Clinton would have much less to worry about if conservatives were directed by a vast right-wing conspiracy.

Similarly, conservatives should wish that the left were in fact a vast, centralized conspiracy. As a whole, the left is also a movement. If one person or one group gave orders to all left-wing groups, the left would have all the effectiveness of the old Soviet economy. Like the right, the left is stronger because it's de-centralized.

When you see detailed articles and elaborately documented books which describe a vast, right-wing conspiracy -- theories which speculate about the powerful, sinister people who supposedly control all conservatives -- rejoice!

All that research and study about how often Paul Weyrich has lunch with Ed Feulner wastes liberals' time. Every hour a socialist carefully studies voluminous books which document the conservatives' "links" is an hour squandered by the left.

And what is more, to the extent the left believes conservatives are a vast, super-secret, centrally directed, fabulously well-funded conspiracy with tentacles everywhere -- a virtually omnipotent, omniscient, irresistible force -- those liberals, leftists, and socialists will despair and give up the fight.

Make no mistake about it, there are some real conspiracies. Terrorists do conspire, but their murderous violence is evidence of their weakness, not of overwhelming strength. And terrorists themselves almost always come to a bad end. The Communist Party of the Soviet Union ran a large, centralized, deadly, and effective conspiracy. But they proved to be not as smart, powerful, or irresistible as some despondent conspiracy theorists claimed.

Most conspiracy theories make no more sense than those of crackpot cultist Lyndon LaRouche, who has argued loudly for years that the world trade in illegal drugs is managed by Queen Elizabeth II of England.