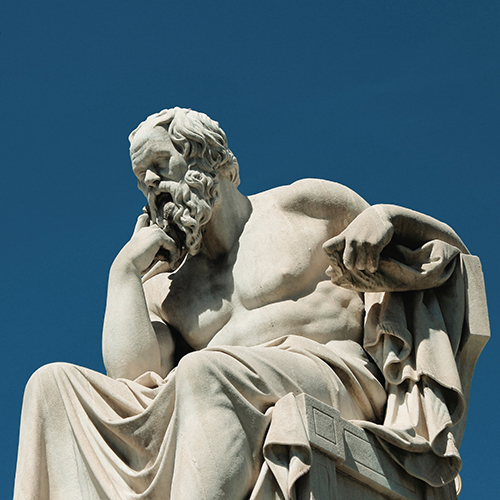 The Philosopher in Action

Adapted from a speech to a long-established group of conservatives in Missouri
and Illinois, The Discussion Club, in St. Louis, Missouri on January 14, 1992

A conservative intellectual in St. Louis recently wrote to tell me, in effect, that he long ago gave up hope of achieving anything worthwhile through the political process.  He eloquently damns politics, politicians, and all their works.  For a fellow in my line of work, which is preparing conservatives to participate successfully in the public policy process, this man is a great challenge.

We have mutual friends and acquaintances, this man and I.  And these friends have described him to me.  They tell me he is a determined collector of books on liberty, tough, smart, opinionated, strong-willed, highly educated, and, my personal favorite, crusty.  Since I am in my early fifties, I know that before long some young whippersnapper may describe me as "crusty."  I can hardly wait.

My correspondent is a great challenge because his letters tell me he's convinced that political action, like the prayer of the wicked, availeth nothing.  His settled view seems to be that education regarding issues and philosophy is valuable.  But that education in practical politics, at best, wastes our time and, at worst, leads us into temptation.

These views are not unique to this conservative intellectual.  They can claim an ancient lineage.  Plato wrote of all those who take part in any kind of government, "They are not statesmen.  They are party leaders, leaders of bogus governments and themselves as bogus as their systems."

Plato, of course, was an idealist best known throughout history for his construction of a theoretical model for an all-pervasive government.  But Plato's personal efforts to have influence over certain rulers of his time failed so miserably that he entirely gave up political activity.

On the other hand, the more practical Aristotle had little interest in theoretical utopias.  He published a systematic study of the actual governments of all the Greek city states, of which only his Constitution of Athens has survived.  And Aristotle reputedly had a significant, practical impact on the mind of his Macedonian student prince, whom history calls Alexander the Great.

More than two thousand years later, a prominent member of the British parliament, Edmund Burke, upheld Aristotle's principles and his prudent view of politics.  In fact, as a university freshman in 1744, Burke attacked authors who disdained on theoretical grounds Aristotle's analysis of the dynamics of practical governmental affairs.  "The blackguard stuff," Burke said, "the hoard of exploded nonsense, the scum of pedantry, and the refuse of the Boghouse school-philosophy."

In 1775, the mature Burke wrote, "Man acts from adequate motives relative to his interests; and not on metaphysical speculations.  Aristotle...cautions us against this species of delusive geometrical accuracy in moral arguments, as the most fallacious of all sophistry."

In our day, Professor F.A. Hayek's final book, The Fatal Conceit, warns us not to presume that the extended order of our society was designed consciously by any person or even by a collective decision-making process.

Professor Hayek was a great admirer of Edmund Burke.  Like Burke, Hayek stresses the almost certainly disastrous, unintended consequences if we succumb to the temptation to use the powers of government to re-design long-established relationships in society in order to produce results, for example, to fit someone's theoretical model of "fairness."

But I may appear to be going a bit far afield.  Bear with me.  Surely I don't for a minute believe that my crusty correspondent has any but the highest regard for Professor Hayek.  And I'm betting he admires Edmund Burke as well.  Burke's contemporary, Adam Smith, surely did. Adam Smith, the father of free-market economics, said that Edmund Burke was the only man he had ever known who had independently reached the same conclusions about economics which he had reached.

More than any other man, Burke is credited with providing and brilliantly communicating the intellectual arguments which activated Britain and much of Europe against the French Revolution and for "the cause of social order."

I have brought Edmund Burke, fully credentialed, into this discussion because conservatives cannot help but admire Burke's towering intellectual achievements for liberty and order.

Moreover, Burke was a practicing, professional politician virtually all of his adult life.

In Burke we see a principled man who, during all his long career, took vigorous actions to promote his principles, a man who understood the proper relationship between ideas and actions, a man who stood by good causes even when it appeared those causes were losing.

Burke could not take seriously people who failed to act and act skillfully on their principles.  He wrote, "For my part, I find it impossible to conceive that anyone who believes in his own politics, or thinks them to be of any weight, who refuses to adopt the means of having them reduced into practice."

In other words, you owe it your philosophy, first, to study how to win and second, to take appropriate actions to win if you can.

Burke explicitly held that education as to issues and philosophy was insufficient. He argued:

“What is right should not only be made known, but made prevalent, that which is evil should not only be detected, but defeated.  When the public man omits to put himself in a situation of doing his duty with effect, it is an omission that frustrates the purposes of his trust almost as much as if he had formally betrayed it.  It is surely no very rational account of a man's life, that he has always acted right; but has taken special care, to act in such a manner that his endeavors could not possibly be productive of any consequence.”

As a conservative activist for more than thirty years now, I have fought for conservative public policy victories.  I am among the many conservatives whom experience has taught that being right, in the sense of being correct, is not sufficient to win.  Victory in protracted political conflicts most often goes to the side which creates the greatest number of effective activists.

In the United States, where the word conservative in politics is understood to imply a love of both liberty and order, it is in my interest and, I believe, in my intellectual correspondent's interest for there to be more conservatives who are both philosophically sound and proficient in practical political technology.

Now I know that my correspondent generously supports a number of activities designed to educate people properly on issues and philosophy.  I've no objection.  The work is worthwhile. More people should support such efforts.  I benefit from such efforts.  I even do some such education myself.

Each year I give away to bright students hundreds of copies of excellent books by F.A. Hayek, Milton Friedman, Edmund Burke, Frederic Bastiat, Thomas Sowell, Russell Kirk, Paul Johnson, Whittaker Chambers, and others of like mind.  But virtually all the conservative educational efforts other than mine focus exclusively on teaching about issues and philosophy.  That is not, in the main, what I do.

For me it is easier to find people already philosophically sound and make them also proficient activists than it is to take competent opportunists and convert them to conservative values.

Each year my many different kinds of seminars train record numbers of people, mostly college students.   Among the topics I teach conservatives are how to organize students, to pass the U.S. Foreign Service examination, to lead students on campus in conservative activities, to pass or to defeat legislation, to gain entrance to the U.S. Civil Service, and to prepare themselves to run successfully for public office.

Many years ago a friend called me a Johnny Appleseed who planted young conservatives all across America.  At first I was charmed by the comparison.  But upon reflection, I drew this distinction: Johnny Appleseed planted seeds and moved on; I do my best to tend the seedlings.

My Leadership Institute has a free placement service at the intersection of supply and demand in the young conservative job market.  I've placed literally hundreds of young conservatives in full-time jobs fighting against the liberals.

In May of last year, my correspondent bluntly wrote a young graduate of my programs that "the political approach of Morton Blackwell is not high on my priority list."  Very well.

But there are two reasons to hope that, crusty though he may be, he might actually re-order his priorities a bit regarding political education.  First, he went out of his way to invite me repeatedly to speak here to the Discussion Club, which is some evidence that his mind is open to what I have to say.  Second, over the years he has made several small donations to my Leadership Institute.  Clearly he has some interest in what I'm doing.  He doesn't seem to be the type of man who spends his money without a good reason.

He wouldn't want to send soldiers out to defend him with no training or with weapons greatly inferior to those of the enemy.  Someone has to defend freedom at the level of practical politics. We, and those who share our principles, must build one another's strength and skills.

My principal life's work has been to identify, recruit, train, and place conservatives in the public policy process.  Fortunately, I'm not the only conservative activist who sees this need.

What I hope and, yes, pray is that my correspondent and others like him who share my policy agenda will reconsider the conclusion that the study of how to win is an unworthy endeavor.

If you dislike the way I work, find someone else who does what I do, but better.

Please don't concede to our common foes a monopoly of political effectiveness.